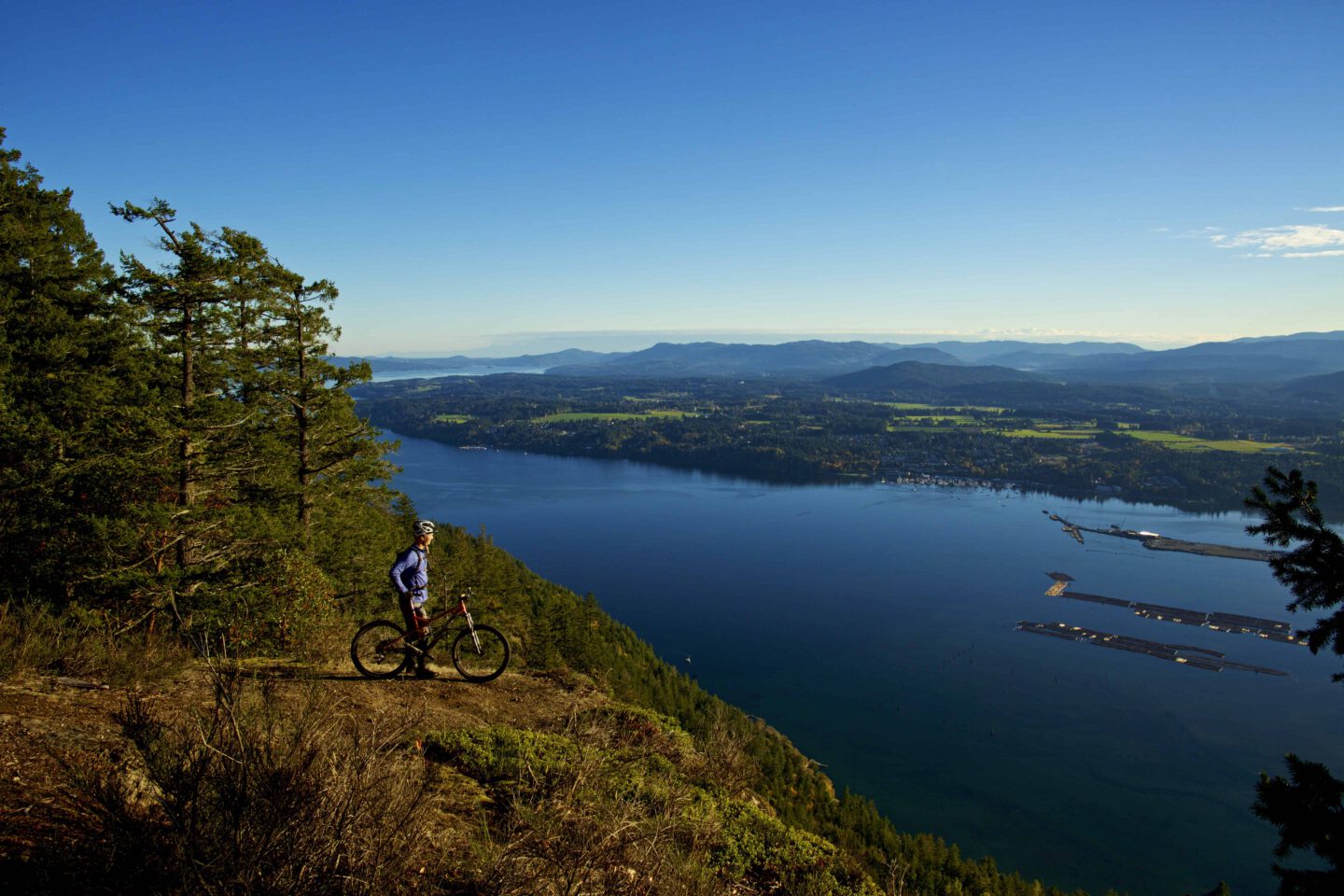 A combination of rideable mountains, dedicated trail stewards, and moderate climate has been growing Cowichan into a premium mountain biking destination for years.

Riding in Cowichan offers an extreme variety, from old school downhill drops to more flowing cross-country trails. The terrain is a beautiful mix of roots and rocks that travels through the thick west coast forest with a splash of south island’s arbutus charm.

Over the past 12 months, cycling of all kinds has spiked in popularity as the pandemic made people look for adventures in their own backyards. Bike sales increased, and supply diminished as more people were hitting the trails. In Cowichan, Grant found himself in the middle of the cycling craze and supply shortage.

Here is Tourism Cowichan’s Question and Answer with Grant Lestock-Kay about Cowichan, the cycling community, and Covid.

Can you briefly describe Cowichan Cycles?

Yeah, we’re a bicycle shop here in the Cowichan Valley. We specialize in mountain bikes, but we try to cater to a wide range of people — whether it’s kids bikes or hybrids and things like that, but definitely, mountain focused.

What made you want to open the bike shop in Cowichan?

I worked for Cowichan Cycles under the previous owner in the old location and really enjoyed it. I had a hard time envisioning what a real job might look like, so I just kept working away in the bike store and eventually, things lined up, and it made more sense to buy it. The previous owner moved to Nanaimo and opened a shop there, and I purchased this one. We moved and rebranded all at the same time.

I would say it’s really diverse. On the top end of things, Mount Prevost is definitely kind of like a breeding ground for Canada’s world-class downhillers. There’s a number of people who live here, whether it’s Victoria or in the valley, and spend their off seasons training here in town so that they can compete on the world circuit. So it’s very, very high level in that respect.

At the same time, it’s really accessible riding. Much of the riding on Tzouhalem is beginner to intermediate trails — I’d say mostly intermediate. Very flowy, rolling terrain — the sort of stuff that a super wide range of skillsets can have a lot of fun with. It’s the type of area that lots of people from other communities come to ride to get a taste of that really accessible riding.

Maple, the other hill in town, brings some other classic technical BC cross-country riding that is challenging both on the way up and the way down.

If you look at all three hills and all the different riding styles, it really does bring a very wide range of different riders.

What should mountain bikers from other areas know about riding in Cowichan?

There’s a lot of variety. Tzouhalem gets a lot of attention because it’s kind of the go-to spot. But we are starting to run into some issues with overcrowding there now, which is really a recent problem.

If you look at Maple Mountain, there’s a recent flow trail that has been developed there that’s quite appealing to some of the people who might otherwise be going to Tzouhalem.

Prevost has some very extreme stuff for sure, but it also has some more accessible trails. There’s a trail called Graceland there that would be sort of blue to black diamond. It’s still sort of within the range of what some of the riders that would’ve written off Prevost would still be comfortable challenging themselves with.

How do you feel Cowichan Cycles fits into the mountain culture here?

We try to be a fairly community-focused bike store, definitely with a bias toward the mountain bike end of things. We put on events every now and then, sponsor young riders who are up and coming, and try to attend trail days and things like that when they come up. I just aim to be involved — however I can, whenever I can. We are currently working on a free trail database, called Ride Cowichan, with detailed descriptions and point of view footage that should help riders expand their knowledge of the local networks. As a side effect, we hope this might inadvertently release some pressure on the more popular trails and trailheads as people explore new zones. Riders can look for Ride Cowichan to be online at the end of March or early April 2021.

I feel it’s important that a shop is integrated within the riding community. I like to think that we’re getting known for that a bit — both for people in town and for people visiting, to try and see us as the mountain bike stop in town.

I think it keeps you in touch. It’s hard to understand the community’s needs if you’re not experiencing it alongside them.

Having you been doing anything differently to weather the Covid storm?

Not necessarily. We in the bike business have seen a large increase in traffic because of Covid. At first, we were trying to get creative and figure out ways to get people in the door when it looked like everything was going to shut down. But after two weeks or so it became pretty apparent that it was going to go the other way. The main focus was just keeping our heads above water because so many people wanted bikes, and they wanted to resurrect their old bikes. Wait times were long, supply was hard to get a hold of, so we didn’t do a lot of promotion or anything during the Covid period. It’s just been trying to keep on top of the Covid demand, which is massive right now.

It’s really cool; there are people who used to ride their bikes 20 years ago who are starting to realize that maybe it’s a good time to get back into it. And I think we’re also seeing lots of friends of riders. Lots of people know a rider in their life, and maybe they thought ‘oh, that person’s crazy’ or ‘I just never see myself doing that,’ and it seems like this year a lot of friends of riders have decided it’s a really fun thing to try out.

How has Covid impacted bicycle supply?

It’s decimated it. Basically, the entire bike industry is backlogged right now. Some [bike brands] are saying that you have to wait 400 days for simple things like a seat for your bike right now. Stuff is really, really backlogged.

It’s everything from just increased demand to workers being spaced out more in factories and things like that. There are also some external factors like shipping container shortages that you wouldn’t anticipate to be an issue that are really affecting things. I’ve heard there’s a bunch of bikes that are ready to go over in Asia just sitting at the ports waiting for containers to ship them. So it’s made it very hard to predict when stuff will come, and the wait times are really like the industry has never seen and probably never will again — it’s a pretty exceptional situation.

What should cyclists know about these shortages?

The biggest thing is to plan ahead and try to have realistic expectations. The normal world with bikes is that people can come in and pick a very specific model they want, and for the most part we can source it for them — or with any luck, we have it in-store — and these days, the options are just much more limited. So, if you come in with a very rigid idea of what you’re after, you might have to make some compromises if you need a bike right away. Otherwise, if you know you want a bike in six months, you might want to start looking now and planning out what that’s going to look like. It’s very hard to just show up and buy a bike right now.

On the delay side of things, because there are so many more people getting into it, especially in the spring once the weather starts to turn, repair wait times are longer as well. Many shops last year were backed up way longer than they typically are. So as far as planning ahead goes, in any given season, if you want a fast turnaround, its nice to get your work done before the season really kicks off, but I think that’s extra important now unless you can afford to wait.