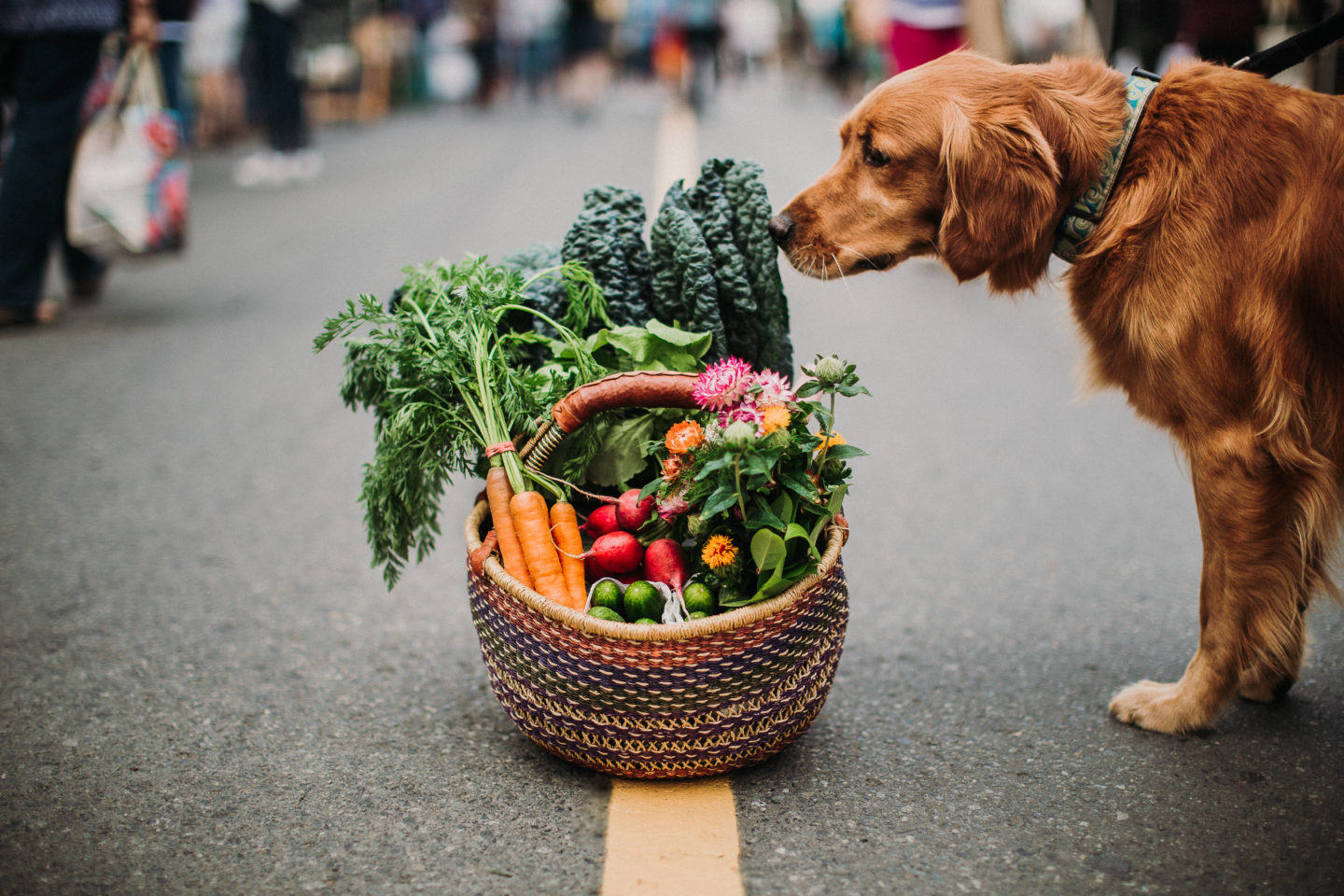 A combination of climate and innovation has created an agricultural and craft mecca in Cowichan.  With Canada’s only Mediterranean climate, there seems to be no limit to what can be produced here.  However, it’s not just the land that makes this region a foodie paradise, it’s the passionate people behind the products who work tirelessly to create quality local flavours that aren’t only delicious, but create an experience that people will treasure.

Here are just some of Cowichan’s dedicated farmers and producers that you should check out.

Enjoy a cocktail by the fire

The Old Firehouse Wine & Cocktail Bar in Duncan has been serving up uniquely crafted cocktails for years and is a definite staple of locals and tourists alike. With a wide array of whiskeys, local wines, beers, and spirits from Cowichan producers, and alcoholic and non-alcoholic drinks, you’ll find something new each time you visit. Be sure to check out their eclectic food menu as well, prepared daily from scratch, and featuring as many locally-sourced ingredients as possible.

Our favourite? You can go wrong with a Firehouse Bourbon Sour and an order of Roasted Cauliflower Gobi enjoyed in their cozy main room. As the weather cools down, there are few better ways to spend an evening! 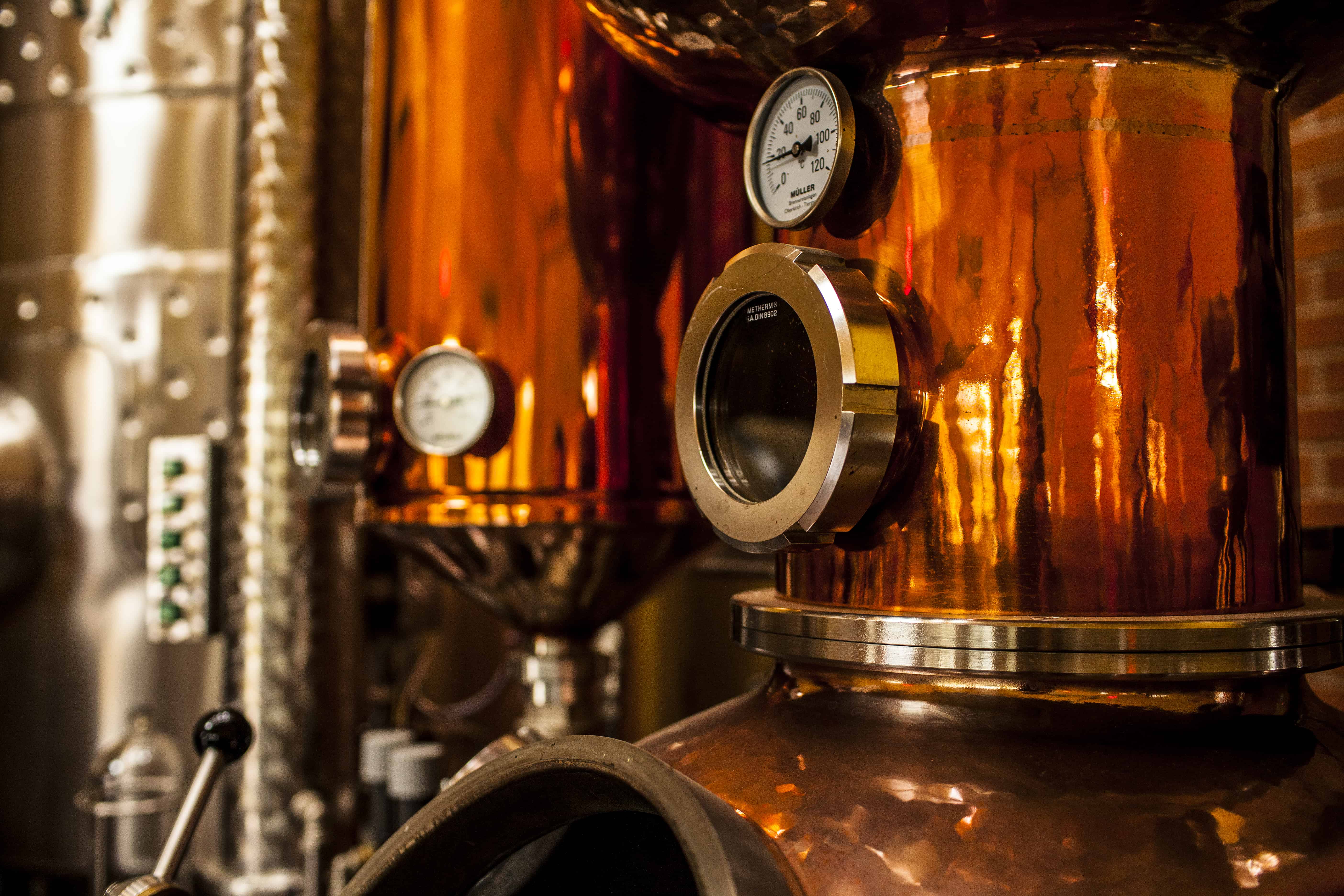 Everywhere you go in Cowichan, craft is key. Our award-winning Cowichan distillers are excellent examples of how attention to detail and careful science creates a quality craft.

Cowichan’s newest distillery, Stillhead Distilling, recently received the Platinum Award at the 2018 SIP Awards for their London Dry Gin.  Along with having strong flagship products in the Vodka, London Dry Gin, and Wild Blackberry Infused Vodka, Stillhead is continually drumming up new and exciting seasonals, which gives spirit tasters something new to try on almost every visit!

Located on a five-acre organic farm, Ampersand Distilling Co. uses their scientific knowledge and traditional distilling techniques to produce incredible handcrafted spirits. With water sourced from a natural spring on their property, Ampersand’s spirits are fresh and refined. Their Per Se Vodka and Ampersand Gin have won BC’s best vodka and gin (respectively) at the BC Distilled Awards in 2016, 2017, and 2018. With spirits like this, the question is “what will you bring together?”

Most people think of cider when they think of Merridale, but they were also one of the first registered craft distilleries in BC when the legislation changed in 2013. They’ve been quietly distilling up at the orchard for years, and the result? Merridale has some of the oldest barrelled spirits in the province. Their apple and pear brandies each are barrelled for six years, while their XXO Brandy is aged for more than a decade! 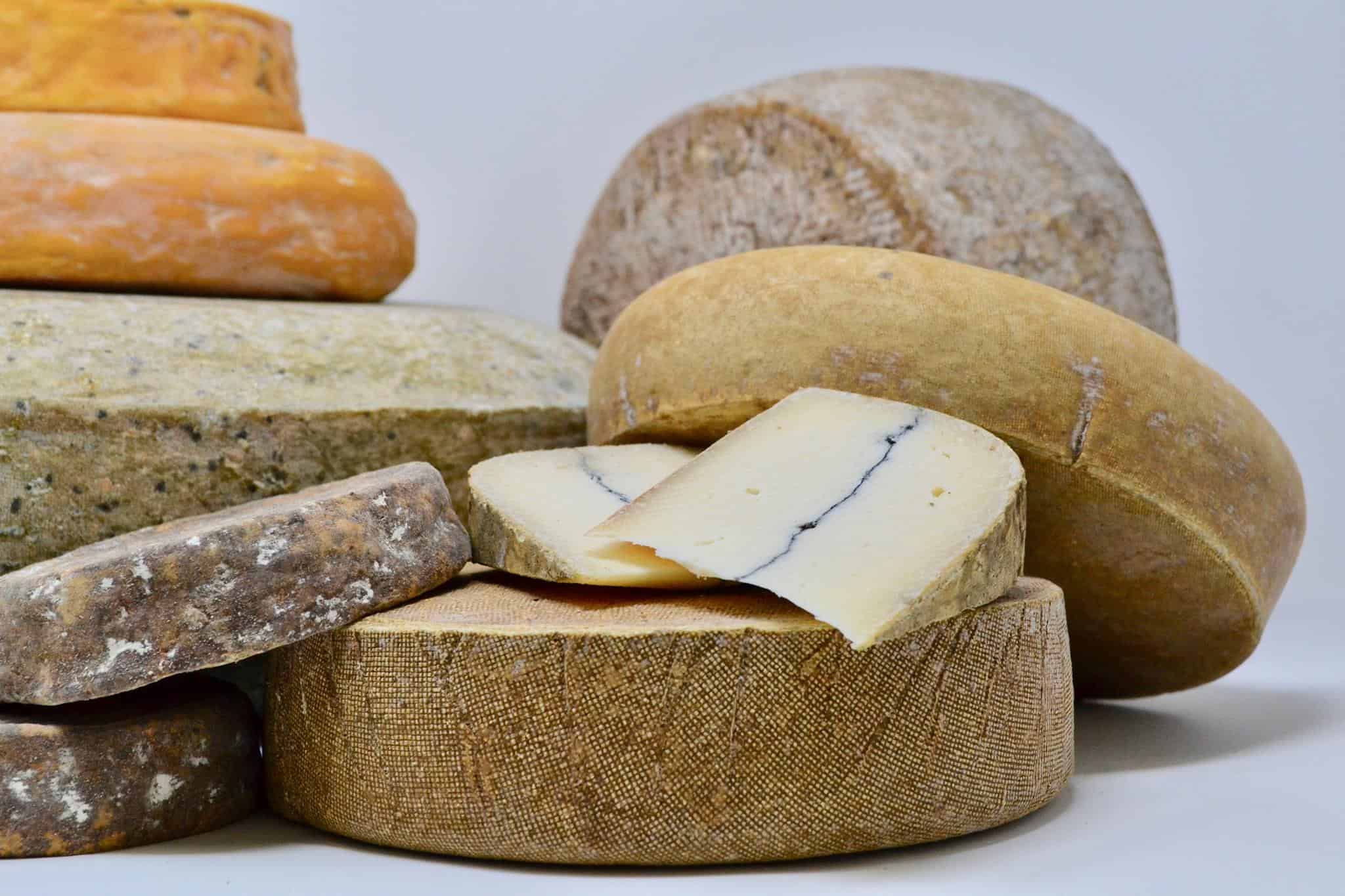 Happy goats make delicious cheese, just ask the producers over at Haltwhistle Cheese Co. With over 100 goats around their pastures, they’re able to add fresh goats’ milk to their cheeses. However, if goats’ cheese isn’t your thing, they also make delicious varieties of cows’ milk cheese. You can snag a sample every Saturday at the Duncan Farmers Market. We suggest you try them all but make sure you get a taste of their Tomme de Vallee. 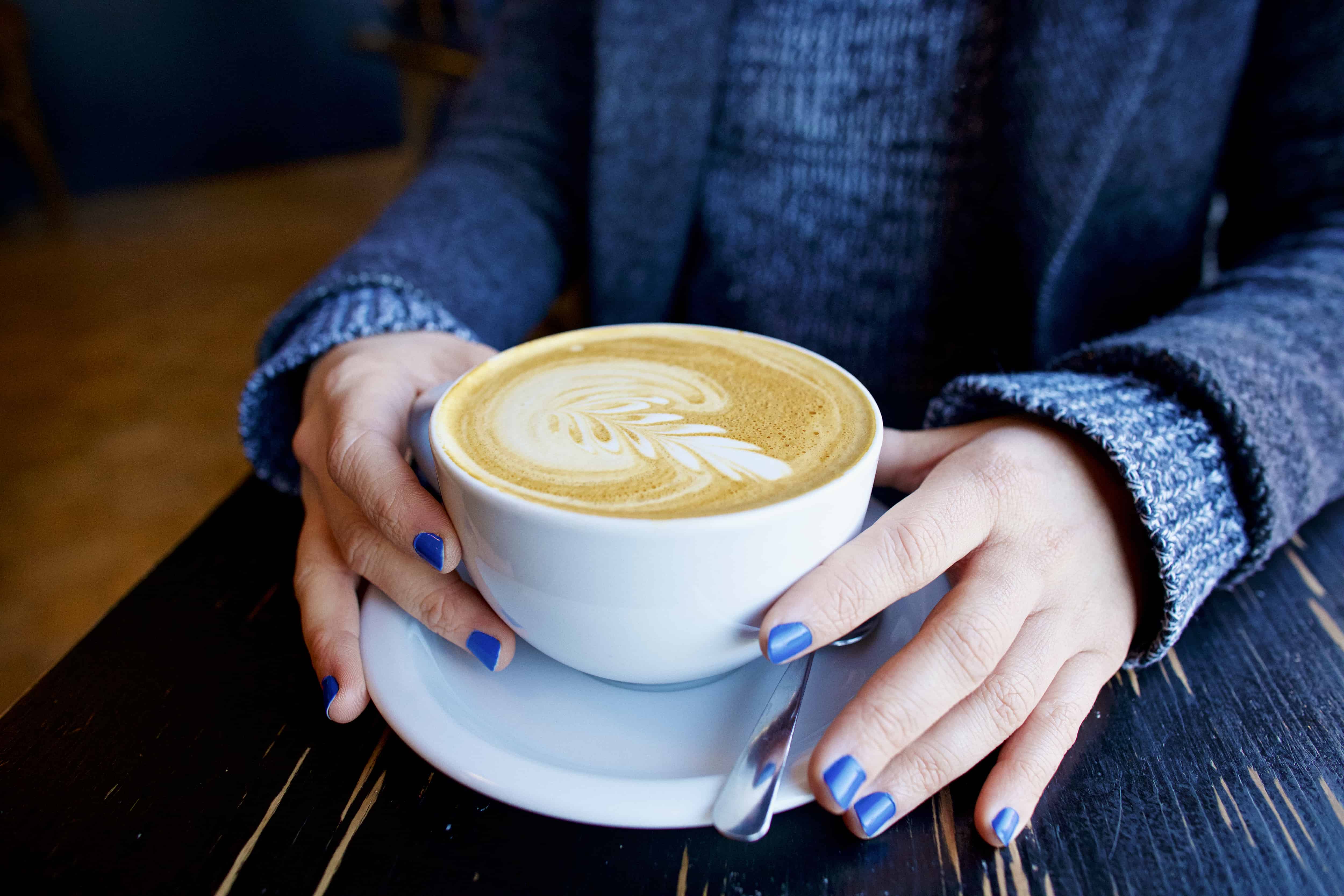 Coffee has been fueling humans for centuries, and in Cowichan we love our caffeine. Drumroaster Coffee in Cobble Hill sources only the highest quality and most ethical beans they can find. Back in Canada these beans are creatively blended and roasted to create a darn fine cup of joe. Visit their cafe in Cobble Hill for the freshest brewed cup of coffee.

What started as a hobby quickly turned into a passion enterprise for the coffee roasters over at Duncan’s Peaks Coffee. Believing that every coffee tells a unique story, their beans are sourced and roasted with the utmost care and respect. The result is a deliciously brewed cup of coffee. A bag of their roasted beans is the perfect travel souvenir that will put a bit of Cowichan in your mug when you get home. 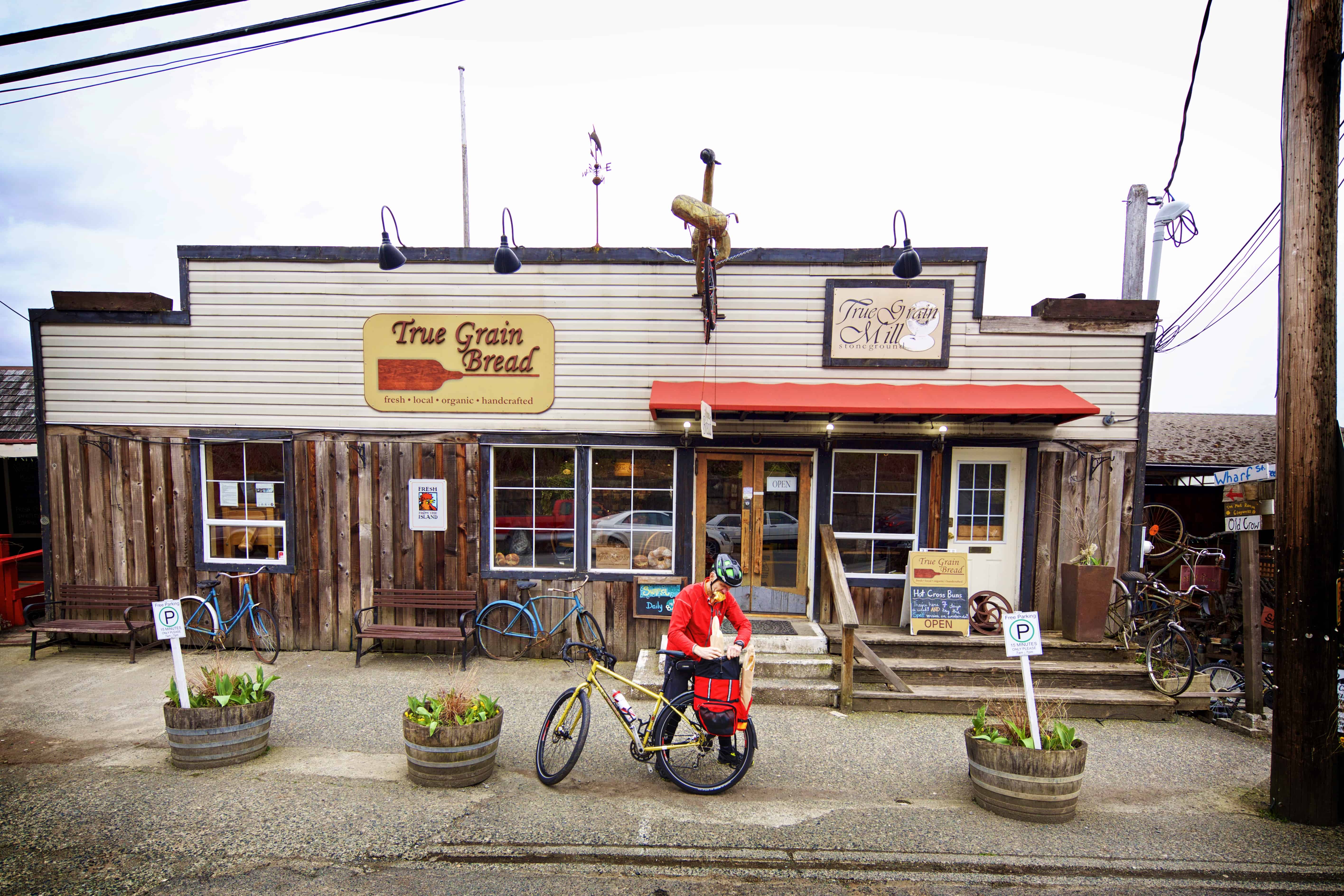 Bun in the Oven

There is no better smell in the world than a freshly baked loaf of bread. Cowichan is home to some spectacular bakeries that are perfecting the art of bread making.

From farming to milling, to baking, True Grain Bread in Cowichan Bay is dedicated to the baking practice. The flour is stone milled so True Grain can monitor the quality during all aspects of the bread process. True Grain bakes an incredible bounty, but if you have to choose just one item from their display, we suggest the fresh pretzels.

With flavours like almond cream cheese, peanut butter, or blackberry grape apricot, it’s no wonder that the Old Town Bakery in Ladysmith is world-renowned for their cinnamon buns. Take a walk down Ladysmith’s historic First Avenue and treat yourself to a delectable bun. Sure, they’re big enough to share, but you won’t want to. 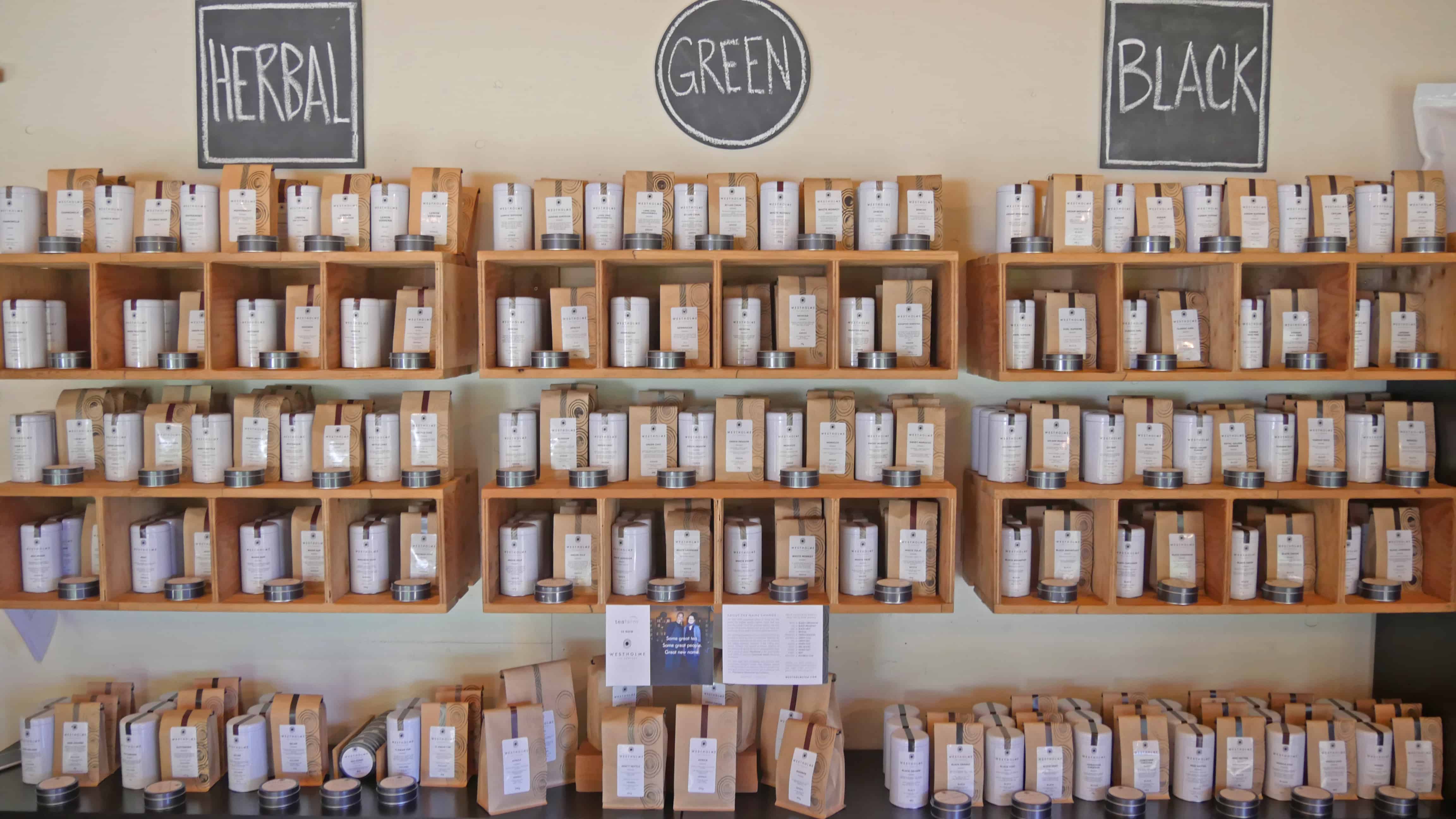 A combination of passion, climate, and culture has cultivated the Westholme Tea Co. — Canada’s only tea farm. Growing and harvesting their own tea plants, Westholme controls all aspects of its production. Although they also blend leaves from other parts of the world, all their teas are crafted with the same dedication and quality. Co-owner Margit Nellemann is a ceramic artist who specializes in creating spectacular teaware. Visit Westholme for a delightful cup of tea, served in a whimsical ceramic mug. 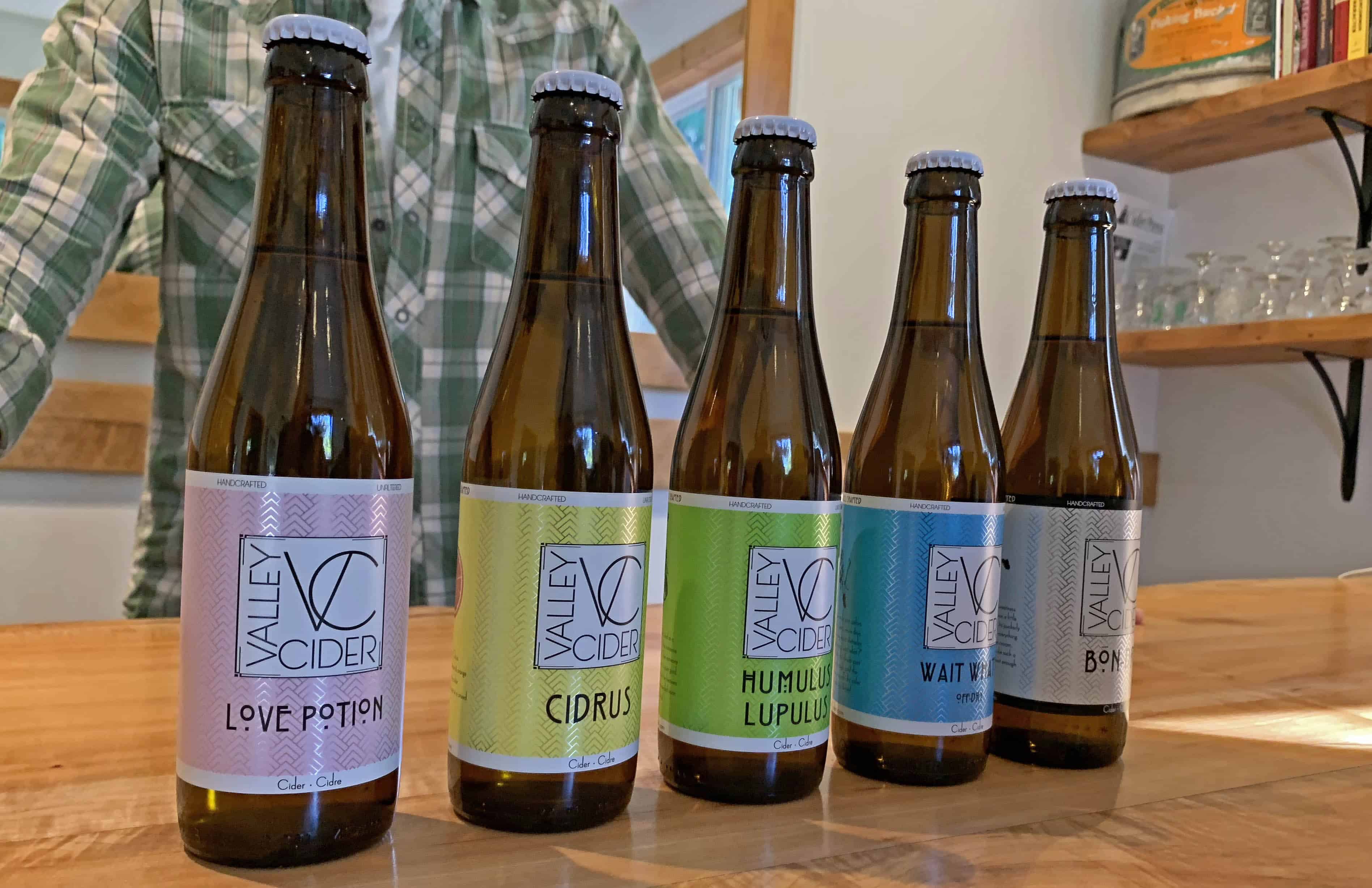 Cider is one of the fastest-growing beverage industries in Canada, and in British Columbia, cider sales have increased 31% over the last five years. Cowichan is home to three spectacular cideries that are taking a very local approach to the craft.

Located along the Cowichan Bay Estuary, Affinity Cider is the newest offering of small batch Cowichan Cider. Their apples are wild or unidentified making a truly ‘Wild Cider.’ Apple lovers will delight in tasting the fresh and complex Cowichan flavours.

Valley Cider, in North Cowichan, has been new kid on the block when it comes to innovative cider production. Bruce at Valley Cider is a wealth of knowledge on the history and craft of cider making. He produces small batches of meticulously crafted ciders with fantastical names like Love Potion, Wait What, and Humulus Lupulus. Book yourself a tasting to get the full story.

Out in Cobble Hill, Merridale has been a pioneer of craft cider for over 20 years. They craft a traditional English style cider but also love to brew a variety of fun and flavourful seasonals, like the Jalisco Cidre and Merri Berri. While you’re out at the orchard, stay for lunch in the Eatery and don’t miss the fairy walk! 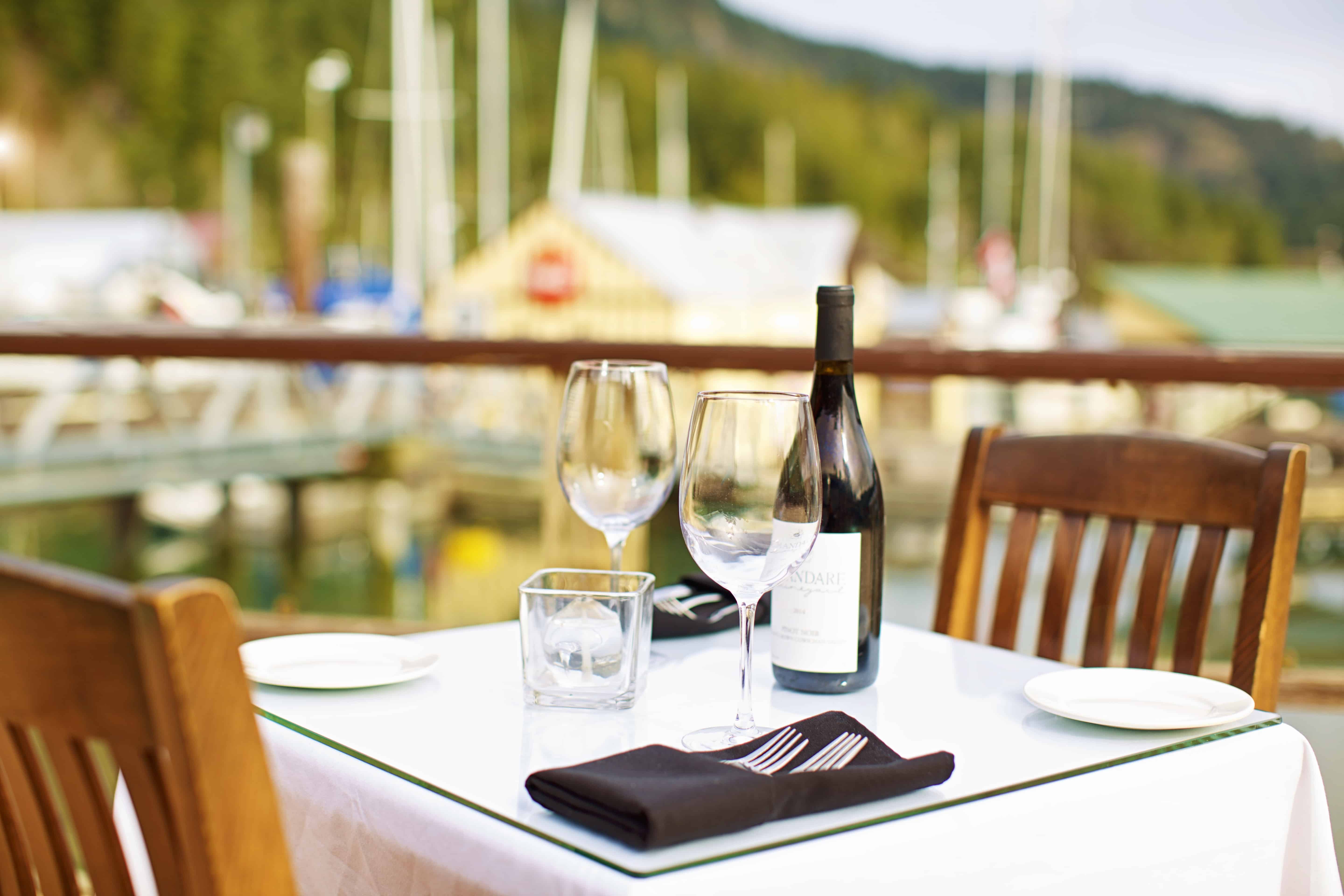 The Cowichan coast stretches from Mill Bay to Ladysmith and provides an unbelievable selection of seafood.

Nestled between Maple Bay and Cowichan Bay sits the beautiful, sheltered Genoa Bay. Up the ramp from the marina sits the Genoa Bay Cafe. The seafood is fresh and expertly prepared, from their Salt Spring Mussels to their Ahi Tuna Poke Bowl there’s a delectable dish for everyone. Ask about their house-made hot sauces.

With almost 360-degree views of the ocean, you expect fabulous seafood from Bridgemans Bistro at the Mill Bay Marina. Spend the day on the water then order a bowl of their Creamy Seafood Chowder. Made with fresh oysters and mussels, this is a great way to get your seafood fix.

The summer in Ladysmith is all about the Oyster Bay Cafe. Located right on the dock of the Ladysmith Marina, the Cafe is the perfect pairing of delicious seafood and stunning scenery. 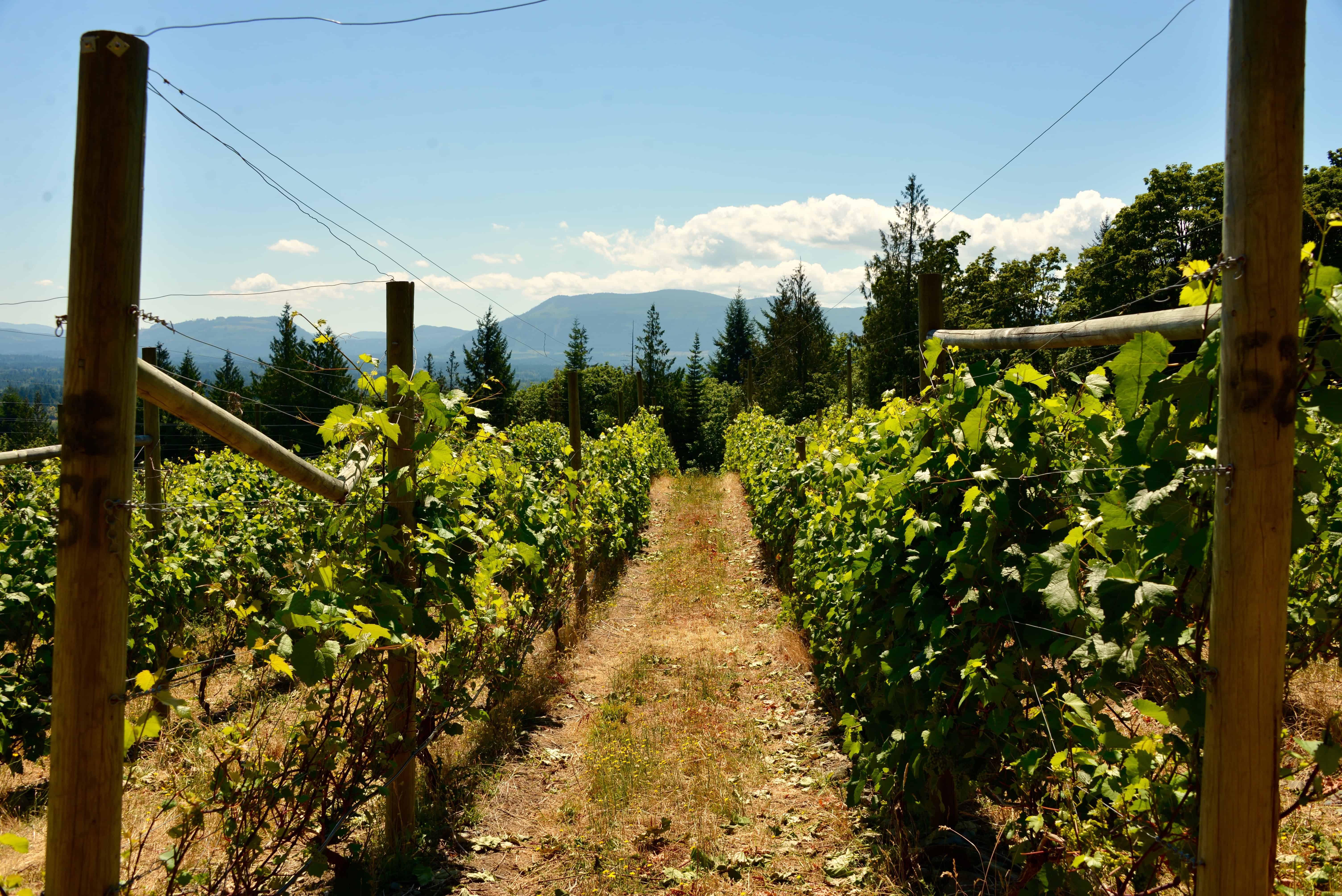 So Much to Wine About

Our wine producers are a passionate bunch who have cultivated a place for themselves on the global stage. The area is quickly becoming known for excellence with Pinot Noir and the sparkling wine, Charme de L’ile, which is only available on Vancouver Island and is made exclusively from grapes grown in the region. Recently the Cowichan Region has been identified as a sub-geographical indication (sub-GI), which is an official and protected term in B.C. used to help people identify local wine origins.

You can read more about all of Cowichan’s wineries here. 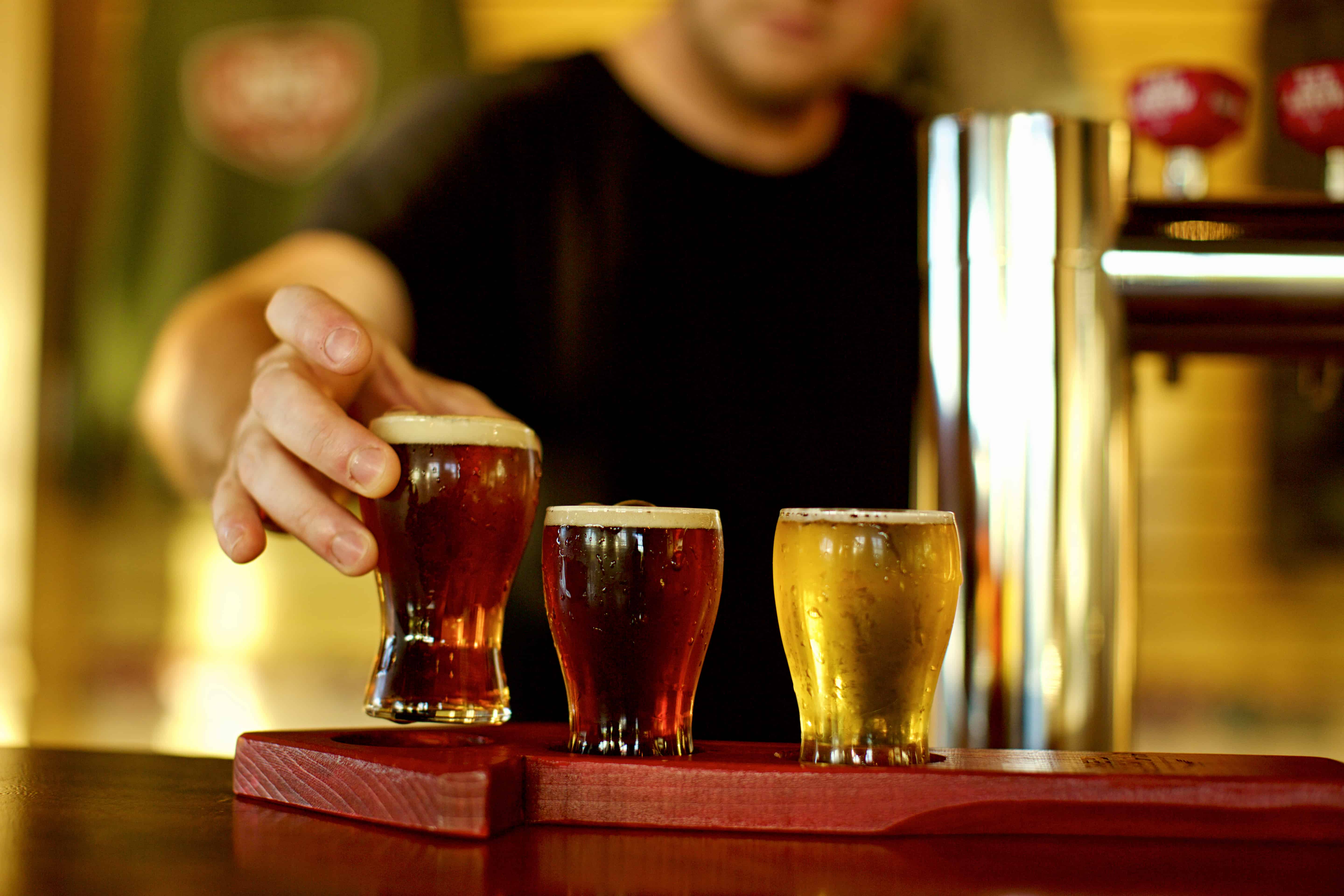 There’s so much brewing in Cowichan! The valley is now home to four breweries offering pints of all flavours that will please any beer drinker.

Looking for a dog-friendly, kid-friendly, fun spot to share a pint or two? Look no further than Riot Brewing in Chemainus. Their award-winning beers and laid back atmosphere supply the perfect site for a relaxed afternoon. Try the Working Class Hero Dark Mild — recently awarded the Gold Medal at the 2018 World Beer Cup.

Over in Duncan, beer is a collective way of life for Red Arrow Brewing. With beers that are crafted to be intriguing, untamed, and free, Red Arrow is a great place to stop in for a pint. If you’re feeling peckish, you can also grab a bite to eat from the food truck parked just outside.

Cowichan’s newest brewery has carved themselves a solid spot in the local beer scene. Small Block Brewing has created a funky, rockabilly atmosphere in Duncan. With beers brewed from fresh local ingredients and creative seasonal that continue to rotate, you’ll be able to try something new on every visit.

Looking for a pint with lunch? Take in the ambiance of the 1940’s building with large exposed timbers and have a seat at the 100-year old antique bar at the Craig Street Brew Pub. With rotating seasonals, there’s always something to pair with their menu.

Ok, we know it’s supposed to be Farm to Table, but why leave the food on the table? With over 800 farms in Cowichan, there is an incredible array of food and beverage that can be feasted upon in a single meal.

Dine from the seasonally inspired menu at Unsworth Vineyard. A seamless mix of comfortable dining meets elegant food design, the chefs at Unsworth are dedicated to creating delicious and exciting dishes from the local ingredients. Reservations are recommended.

Love well, live well, eat well at Alderlea Farm and Cafe. Located in Glenora, Alderlea Farm grows an incredible supply of agricultural products on the farm that are brought up to the kitchen where Katy concocts delicious and hearty meals. In the summer, sit on the patio and watch the cattle graze. It really doesn’t get fresher than this.

Don’t worry about a food coma, book a night at the Farm Table Inn. Cultivating as many ingredients as possible on their property, the Farm Table Inn is truly ‘nestled in nature.’ All these fresh ingredients are transformed into exquisite dishes by Chef George. Check out their list of specialty dinners and brunches here. Just remember to watch out for the chickens as you head up their driveway!

10 Ways to Experience the Cowichan Harvest

10 Ways to Make Your Holidays Merry and Bright In Cowichan