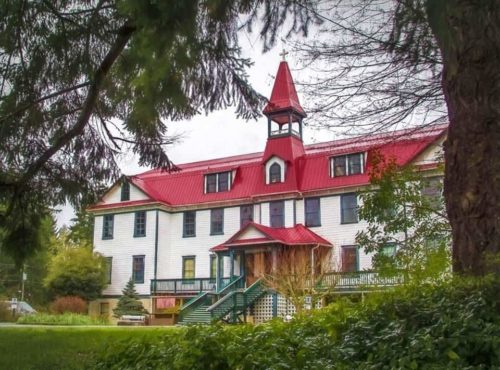 Cowichan’s rich history is engrained in the region’s present-day culture. Local communities honour their historical roots and continue to share the important stories that have shaped this unique part of the world. Here are five must-see historic places in Cowichan.

A beautiful property of over 400 acres, Providence Farm sits in North Cowichan, below the face of Mount Tzouhalem. As you drive up the winding gravel driveway, you’ll see a stunning and picturesque building, painted a cheery red and white.

Established in 1864, the pioneering Sisters of St. Ann purchased the 400-acre farm to develop and build a boarding school for young First Nation girls and later, orphan girls. Throughout the years, the school grew and changed. In 1921, due to a fire, a larger school was built to accommodate a larger student population of over 100. And in 1956, the school became a day school for girls and boys before it closed its doors in 1964.

In the 1960’s and ‘70’s a group of people with a common vision to build a community and establish a better way of working together came to the old St. Ann’s School and farm. By 1979 an agreement had been made to establish a registered charity called Vancouver Island Providence Charity Association in memory of Sister Mary Providence, the school’s founder.

The beautiful red and white building you see today is that same school built in 1921. Today, Providence Farm is a therapeutic community providing programs for those with developmental and intellectual disabilities and age-related illnesses. Providence Farm is also the home of the renowned Islands Folk Fest as well as many other exciting and fun events. And, the General Store has a wide variety of organic produce, eggs and juices, as well as locally and farm-made crafts. 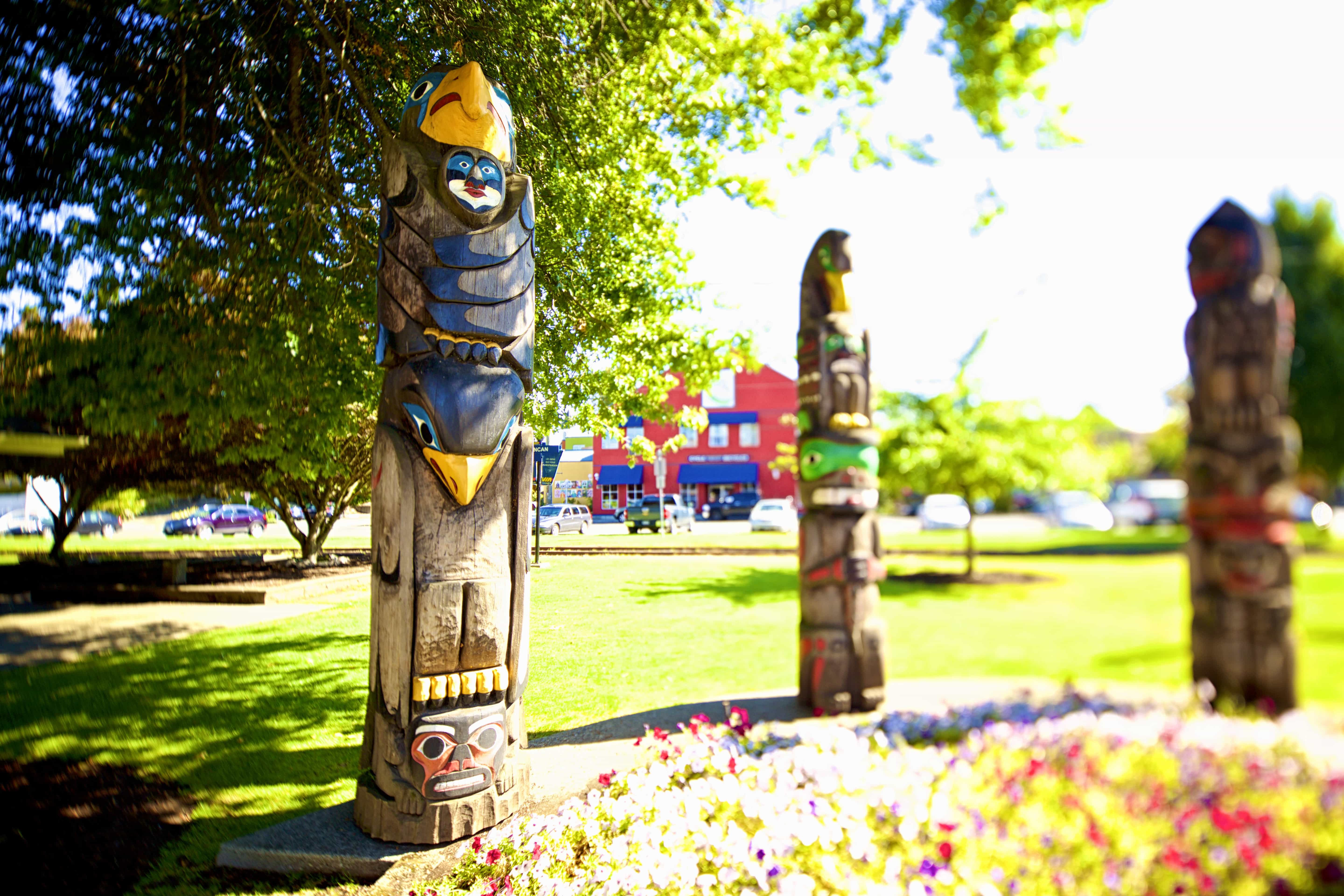 “The City of Totems”

Duncan is proudly known as the City of Totems, and is home to an ongoing project that has developed one of the world’s largest outdoor collections of publicly displayed totem poles. The project began in 1985 and was designed to attract visitors to Duncan. In 1986 Duncan was officially designated the City of Totems.

Indigenous culture has always been and will always remain a big part of Cowichan’s fabric. Traditional lore has been preserved by word of mouth and by way of hand-carved totem poles too. Each totem pole tells a story that can be retold if you know what to look for. You can view the entire collection in a free, self-guided walking tour. Along the way, you’ll encounter the world’s widest totem pole and “Quench,” a brass totem pole that serves as a public water fountain.

Currently, the City of Totems is adding a new piece of history, in celebration of Canada’s 150th Anniversary and of our community’s Coast Salish First Nations heritage. Make your way to the Charles Hoey Park in Downtown Duncan, to watch and participate in carving a 20-foot totem pole under the guidance of renowned master carver Thomas Hunt Jr. A traditional ceremony to unveil, raise and bless the totem pole will take place upon completion of the project. 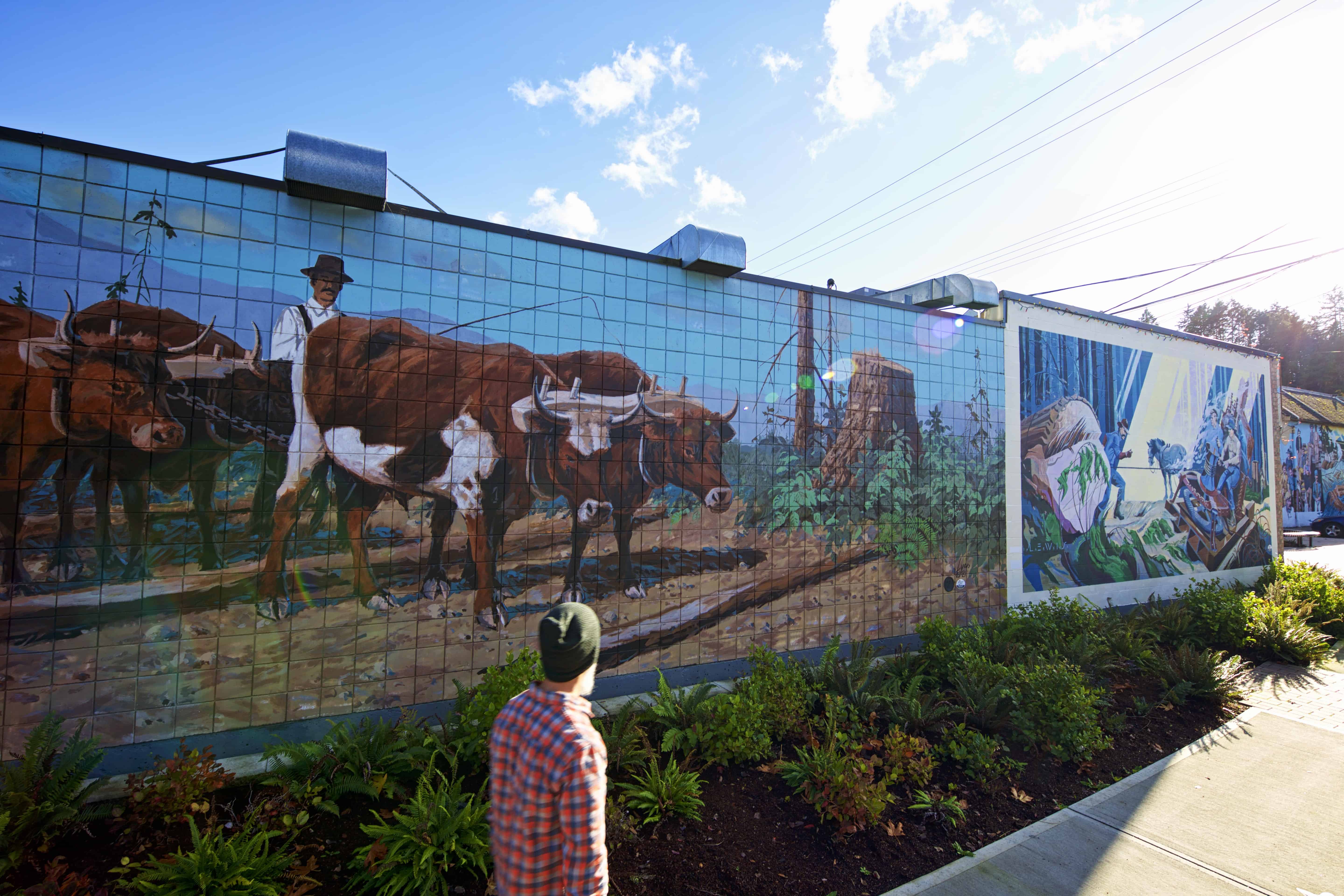 “The Little Town that Did”

Chemainus is a small town with a big past, filled with devoted locals, and beautiful artwork. This gorgeous seaside town put itself on the map in the most unlikely way possible. A resource based community, reliant on the local pulp mill, “The little town that did” beat the odds and became a world-famous example of how a small town can create substantial change for survival.

The Crofton Mill, which opened in 1862, was, and still is, the main employer of the area and brought about the birth of the town. However, in 1981, the mill town faced a big threat. The recession that hit British Columbia was affecting towns small and large across the region. With an impending threat of possible closure of the town’s major employer, Chemainus was faced with that very real possibility of becoming the next ghost town.

As resource revenues steadily declined, the town hatched an optimistic plan that would prove Chemainus to be more resourceful than it ever was in the past. The idea was to capture Chemainus’ history in a series of large, striking murals painted on the walls of the town. With that decision, a new industry was born, inspiring the town’s well-earned description of “The Little Town That Could.” Today there are 44 amazing murals, plus various sculptures, which can all be viewed by following the footprints that direct visitors along the walking tour.

As a result of this forward thinking, Chemainus put itself on the map as a tourist destination and has attracted numerous new businesses and many thousands of visitors a year.

To re-live and learn more about historic Chemainus, visit the Chemainus Murals or take a tour! 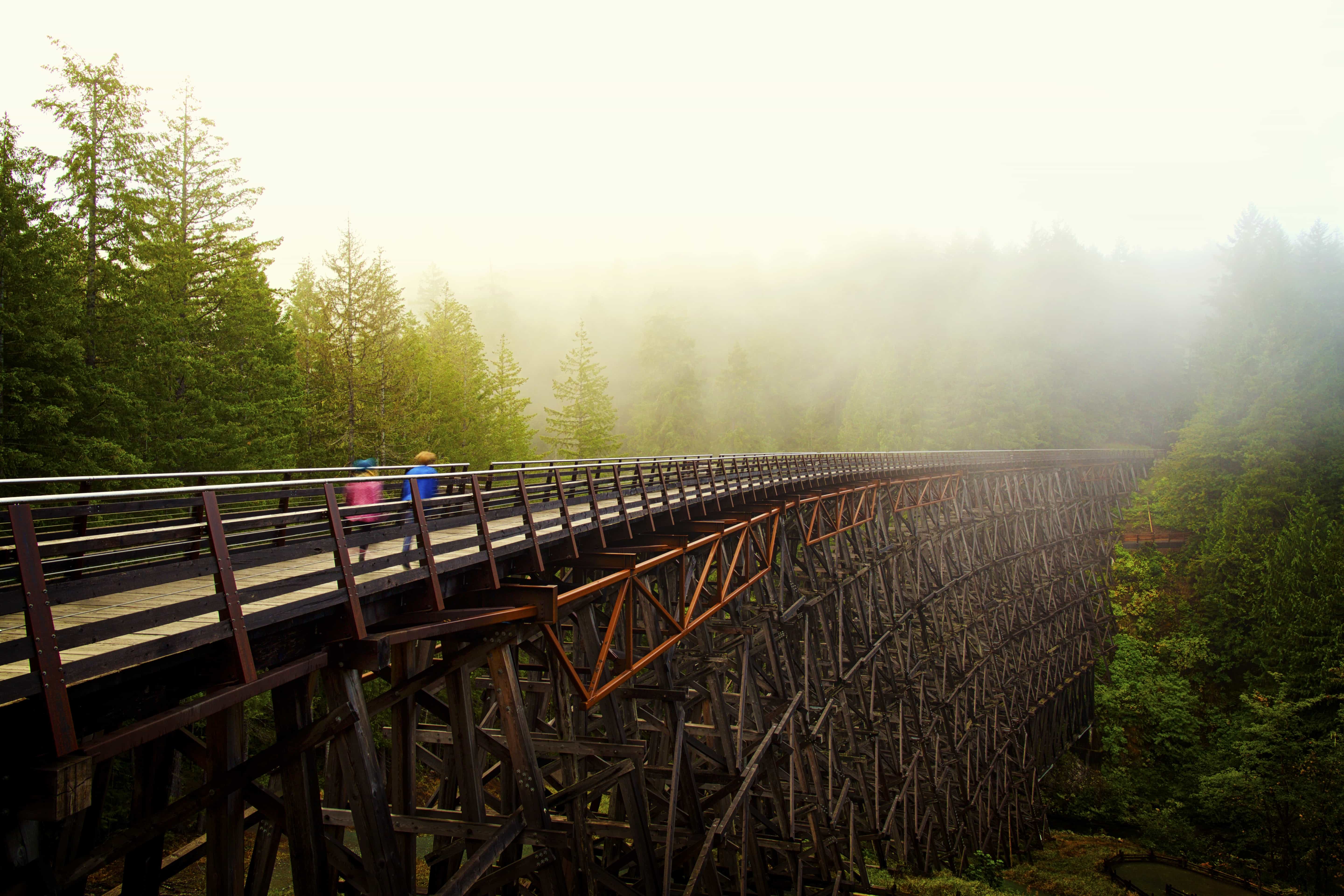 One of Cowichan’s most impressive landmarks, the Kinsol Trestle is a tremendous 44 meters high and 188 meters long, spanning the Koksilah River just north of Shawnigan Lake. Its vast dimensions make it one of the highest railway trestles in the world!

Completed in 1920, and named for the short-lived “King Solomon Mine,” the original trestle was built when forestry had gained ground on Vancouver Island and a more efficient way to transport the region’s huge, old-growth timber was needed. An impressive engineering feat even by today’s standards, it remains one of the loftiest wooden railway trestles in the world. The Kinsol Trestle is part of the Trans Canada Trail network that skirts Shawnigan Lake and winds its way to Cowichan Lake, North Cowichan and Ladysmith.

The last train crossed the trestle on June 20, 1979 and the rails were removed in 1983. In the early 1980’s, advocates of the trestle tried to have it restored and/or designated as a heritage structure. Finally, after years of campaigns to save the trestle, rehabilitation work began in 2010. The official reopening of the trestle was July 28, 2011.

The new and improved trestle includes a number of viewing platforms that extend outward on both sides and allow better sightlines of the structure. Visitors can follow the newly built Kinsol Interpretive Trail that winds downhill from the trestle’s north side to stand 130 feet below the bridge in order to appreciate the full immensity and complexity of the Kinsol Trestle. 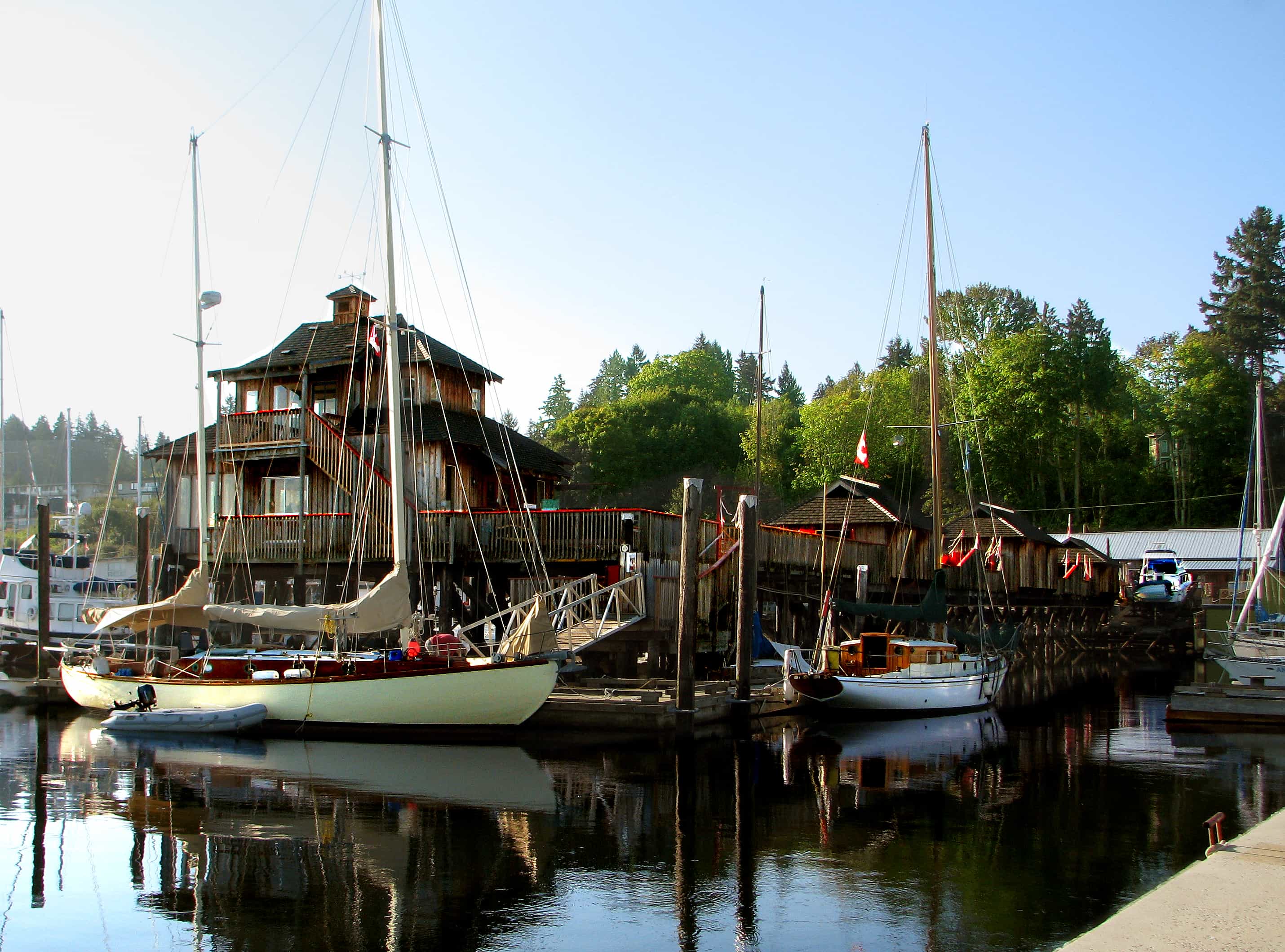 In the 1800’s, Cowichan Bay was home to four first nations communities with a population estimated at between 4,000 and 5,000 people—the Knepisen, Comiekan, Clem Clemluts and Kipalus. You wouldn’t suspect, walking through the quaint and quiet community of Cowichan Bay today, that it was also once a bustling port taken over by large oil companies such as the Imperial Oil Company, Shell, and Chevron.

There is rich and deep-rooted history here and The Cowichan Bay Maritime Museum preserves and tells that history on the site of the former Chevron fuel dock. As you walk along the dock, feast your eyes on fascinating displays from First Nations artifacts, to old steamship engine parts. It really is a walk back in time. As you continue down the pier, you will also be rewarded with a stunning view of the seaside town!

This fascinating museum is operated by the Cowichan Wooden Boat Society, a non-profit organization founded to preserve, exhibit and demonstrate the Maritime heritage and culture of wooden boats, especially as experienced on Canada’s West Coast. The Society was originally conceived in the 1970s as a wooden boat-building centre but has expanded its role to become a maritime centre, a museum and a wooden boat workshop. In addition to the exhibits and museum the Centre holds wooden boat building classes for adults and children in its superbly equipped workshop.

On your way to the museum docks, make sure to take a peep into the windows of the wooden boat workshop room, there’s almost always a person or two working on a new vessel. Your children will enjoy building their own boats too—the museum provides the wood, hammers, nails and everything else required to assemble their own little ship.